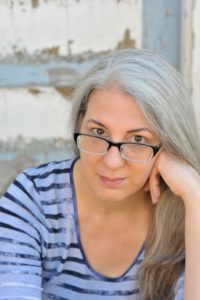 1. Which character in “Rudolph the Red-Nosed Reindeer” is your favorite, and what does that say about you?

Bumble, post dental surgery, all roar, no bite. Tall and can reach things.

2. What are some of things you do to work your way through a plot problem?

See above, roar a lot. Boring answer: on the treadmill.

Candy canes, licked down to a dangerously sharp point.

Oh, lordy. [*pulls off socks so I can use toes for this count*] If I count all the times I took an existing manuscript and rewrote it (change a romantic suspense into a contemporary), the total is six. [*puts socks back on*]

The closer you get, the bigger the disappointments. Don’t quit.

2014. I missed being a finalist in the Golden Hearts by one point, and there were only two finalists in my category. I was considering quitting but went to RWA Nationals and my tribe kicked my butt back into the game. [Note from Dana: The Golden Heart Award, sponsored by Romance Writers of America, is the premier contest for unpublished romance writers.]

I’m more of a “Holly Jolly Christmas” kind of girl.

I think I’d have to say Lena Reyes, Sadie’s best friend in Spying on the Boss. She has her own book coming out in April. She is strong, smart, sassy and fierce when it comes to family and friends.

Depends. I’m a nurse, so I work on holidays. If I’m not working at the hospital, I may squeeze in a few words. We aren’t big party people so our holidays tend to be rather low-key.

No. I was part of a writer’s group many years ago, but I was the only romance writer there, so I felt pushed to be “literary”, and it hurt my writing. Now, I have my Fella give me feedback (he is a writer also).

Which one? Go to the gym at least four times a week? Drink more water? Eat more healthfully? Start dressing like a grown up? Don’t wear pajamas all day? 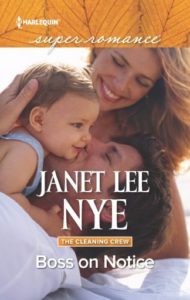 She tried not to look, but how could she not? He was too good looking. That black curly hair and the blue eyes. His shoulders, his chest, his arms…he was built but he didn’t try to show it off by wearing a shirt two sizes too small for his body.  She bit her bottom lip, felt it slip back into her mouth as she watched him. Those jeans. Levi’s. Straight forward working man’s jeans. Nothing fancy. She felt warm in all the wrong places.

Short, sweet, to the point. Get out of here before he offers you a ride. She pushed the stroller but he met her at the sidewalk. He squatted to look at Ian.

“Hey, little man. What big adventure are you off to today? Going to break in to a few more houses?”

“Sorry,” she said. “Shouting seems to be the only volume he has these days.”

He stood and smiled at her. “You guys always seem to be on the go.”

He looked at her. Then at the duffels. Then at the street. He rubbed his jaw, the stubble there making a faint scratching noise that went straight through her. She squared her shoulders.

“Yeah. I should get back to work.”

Work. Whoa. Wait. What was it that lady had told her on the phone? He was here setting up a cleaning business. She could clean.

“Can I apply? I don’t have any experience other than cleaning my own house. But I’m a fast learner. And I’m not afraid of hard work.”

“Mickie,” he said, cutting off her babble.

“We are an all-male cleaning company. That’s our gimmick. Good looking guys cleaning your house.”

“Oh.” She was too disappointed to say anything else.

“It’s okay. Nothing ventured and all. Well, I should get going.”

She could feel him watching her as she navigated down the sidewalk to the street. All male. Weren’t there, like, discrimination laws about stuff like that? She tried to get angry about it but she couldn’t seem to think around the echoes of the scrape of his fingers against the stubble. Her own fingers twitched on the stroller handles. She’d like to run a finger over that stubble.

Boss on Notice, an installment in The Cleaning Crew miniseries, may be purchased through these retailers: Amazon, Barnes & Noble, Harlequin and Books-A-Million.

Janet Lee Nye is a writer by day and a neonatal nurse by night. She lives in Charleston, SC, with her fella and her felines. She spends too much time on Twitter and too little time on housework and has no plans to remedy this.

Stay in touch with Janet through her website, www.janetleenye.com or through these social-media channels: Facebook and Twitter. Learn more about Janet and her fellow Harlequin Superromance authors on the Superromance Facebook Page or the  Superromance Authors Blog, www.superauthors.com.