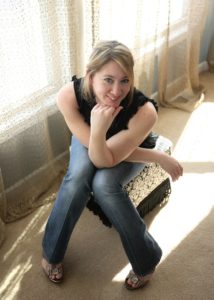 1.Which character in “Rudolph the Red-Nosed Reindeer” is your favorite, and what does that say about you?

The Abominable Snowman, Bumble. Poor thing has no teeth at the end, but he does the whole lemon out of lemonade thing and is quite happy when all is said and done…Who knows what says about me! LOL!

2. What are some of things you do to work your way through a plot problem?

Shower. Meditate. Wine. Hash it out with CPs. Wash dishes (this seems to work best!)

Trick question! 6 full drafts of one manuscript in 6 years, but it was a full rewrite each time so it was like 6 books. The “second” book, I cut out 100 pages at one point and did serious rewrites—probably the equivalent to 2 books. So, technically, 2 books, but in reality, 8 books. And, are you confused yet?

I’ve had a few low points for different reasons—but the recovery is always the same. Keep on keeping on. BICHOK. Bottom In Chair, Hands On Keyboard. Fight for what I want! I’ve had people tell me I couldn’t do be an author for various reasons—I’ve never believed. Or, at least, not for long. 🙂

Traditional, mostly because I worked full-time and didn’t want to figure out how to go it alone!

“O Holy Night”, ANY version. Though I might have crush on Bing’s voice.

Tough one. Grace, because she’s got a steady coolness I can’t dredge up. I’m much more like Lilias from In Bed With A Spy, or Vivienne from my upcoming release from Entangled—they don’t hesitate to kick a$$. I have a temper! Usually well buried, but when it comes out…whoo boy. Run. But Grace has something softer about her that I wish I could find in myself.

Same as always… BICHOK. It’s actually easier to write over the holidays because I have more free time!

Do they serve potato chips at the holidays? Because I’ve actually hidden in my pantry so I could eat cheddar and sour cream chips and not have to share. I might have also been in recovery after a Terrible Twos tantrum.

Not a formal critique group, but a few friends who trade manuscripts back and forth…It’s been invaluable. Absolutely invaluable. We were at the same points of our career, which meant we discussed craft, too, and though I still have so much to learn, I wouldn’t know what I do know without them!

Lose weight, naturally! Some years I do, some years I don’t. But I recently decided not to make that resolution. My 2017 resolutions are: Be happy. Be healthy. Be strong. Love on my family. Forgive myself for mistakes, but always persevere. Go to the gym not because I want to lose weight, but because I want to be a healthier version of me…I think that about covers it! 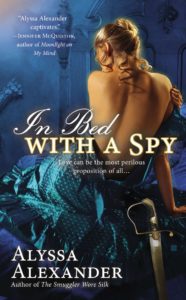 In Bed With a Spy

It didn’t seem possible a person could be abducted from a London townhouse in the middle of a crowded ball. But it had happened.

Now here she was, sitting in Angelstone’s carriage, with the faint glow of the lamps highlighting his inflexible jaw and cutting cheekbones. All lean legs and broad shoulders, he filled the vehicle’s interior. In the partial light, with his unreadable gaze and his unruly queue of hair, he looked much more dangerous than a fallen angel.

“Mrs. Fairchild.” The words were clipped. No seductive purr, no sensual smile from those lips. Lips that had kissed her senseless and reminded her she was a woman with needs and desires. Even now, she could she taste him. Rich brandy and wild heat.

Embarrassment washed through her. She’d been forward and shameless, and look where she found herself. Hands bound and trapped in a man’s carriage, destined for parts unknown and heaven knew what treatment.

“I demand to be released.”

“I think you are quite aware.” He watched her steadily as he pulled off first one glove, then the other and stuffed them in his pocket. It was an unpardonably rude gesture for a gentleman. Obviously, he was not a gentleman.

He was close enough she could kick him. But she wouldn’t be able to open the carriage door quickly with her hands bound. And he had the medallion. The final gift from her husband, one he gave her with his last breath.

She refused to leave without it.

“The medallion is mine,” she said.

“Is it? Interesting.” The conversational tone of his words was oddly frightening. “Well, now the medallion is mine.” Propping his elbows on his knees, he leaned forward. He filled the space between them until his face was only a foot from hers.

The instinct to shrink into the seat was overwhelming.

So she leaned forward to meet him. And smiled. Slowly. “Give me”—she angled her head insolently—“the medallion.”

In Bed With a Spy may be purchased from these retailers: Amazon,  Barnes & Noble and Books-A-Million.

Alyssa Alexander is an award-winning author who survives the cold Michigan winters by penning romance novels that always include a bit of adventure. Her debut release, The Smuggler Wore Silk, was awarded 4.5 Stars and Top Pick by Romantic Times and nominated for the RT 2014 Best First Historical and the 2015 Best First Book RITA. Her second book, In Bed With a Spy received a Starred Review from Publishers Weekly and 4.5 Stars and Top Pick from Romantic times. She has been called a “talented newcomer” and “a rising star you won’t want to miss.”