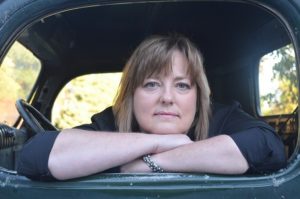 Since I’m a smidge older, I’d say Journey or Chicago. I love classic rock. Although I do like current stuff, I always go back to the bands I grew up with, crank up the sound, and sing at the top of my lungs. Who cares what the guy in the car next to me thinks!

I’d have wanted to know the truth about publishing. It’s not easy and only a small percentage of authors sell their first book and become an instant success. But it’s also fun and fabulous. I’d tell new authors to enjoy the ride!

Adam Levine. He was a nerd in high school and now he’s hot. Seriously, Google young Adam Levine.  We like to see heroes and heroines grow and change, and Adam did that in his real life. Besides, he fits my bad boy criteria!

I’ll cook anything easy, like simple pasta meals, or if I’m stressed, I let my hubby and son fend for themselves. Google is perfect for finding recipes that don’t take much time to fix. As long as I don’t give my family e coli bacteria as a side dish, they’ll eat almost anything.

My first book was “Catherine’s Choice”, a historical western. It started from a horse’s point of view (yes, true!). The hero and heroine spent most of the book hunting down bad guys and fooling around. It was really long, thin on plot, and never sold. But it started my love of storytelling.

Sorry George, but I’d have to say Kristin. I do love books of all kinds, but I head for romances (or thrillers) for escape reads. And if the book makes me laugh, I’m all in!

I’m an early riser. Sometimes too early. The best time for me to write is when the house is quiet and nothing breaks my writing flow. I immerse in the setting and the characters and hate interruptions, so I work when my family is sleeping. The rest of the day is family time and for doing other things. I’m almost 100% a water drinker, so no caffeine.  Thankfully, I can write when in a sleep-deprived coma!

I’d have to say I presented most like sweet and shy Dorothy, but I was feisty beneath my little blue checked dress and lacy socks. I crushed on the pre-teen bad boys and wanted to marry Elvis. Other than growing up and liking bad boys who are old enough to shave and buy beer, nothing has changed!

I can’t paint or sew more than a straight hem, so those are out. I’m a geek for old stuff and like to use vintage in decorating, so that gets my creativity going.  For example, my front porch is a fun mix of wood and metal flower planters.  If there is a garage or estate sale near my house, I’m there.

Getting a bargain is the best. I shop at the mall for clothes as I won’t buy anything without trying it on. Cute on the rack doesn’t mean cute on my post-three-kids body. Yes, I am an online shopper, too, mostly books, and I impulse purchased a set of vintage car bookends a few weeks ago on eBay. Love them.

It took me 17 years to sell a book, so I had a lot of self-doubt. Fortunately, I’m stubborn and couldn’t give up my dream. I hoped that if I kept writing, eventually I’d get a story that would interest someone. When it finally happened, I think I appreciated it more than if I’d sold too early before I knew what I was doing, how to craft a book, and how to build a career.

Pawn Stars. I love junk that turns into treasures. Antiques Road Show is so fun to watch.

Right now I have 8 novels, 1 novella, and 2 short stories out. Another book in my Brash and Brazen series comes out in November. I’ve also pitched a new series and am waiting to hear. There are 5 or 6 full manuscripts and lots of partials languishing in my computer and files. I could probably paper my bathroom in rejection letters.

I briefly wrote for a small press. I think the editor wanted to write the book herself. She wanted nearly everything changed. My agent had to talk me off the ledge outside my second floor office. Thankfully, she did because I’d have had to revise the book while riddled with broken bones and a body cast. Two stories isn’t high enough up! Seriously though, I’ve never had revisions like that. It was crazy.

Although I have newer books in my Brash and Brazen series that I’d consider favorites, I’d have to say my first published book, THE SCHOOL FOR BRIDES, holds a special place for me. How could I not love the book that made me a published author? 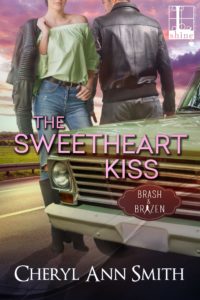 There was one thing guaranteed to get Jess Lucas through a wedding that she didn’t want to be in, with a bride she intensely disliked, and a headache that had spiked through her skull the moment she slipped the hideous bridesmaid dress over her head: Alcohol.

The crystal clear liquid called to her with a sweet siren song from within the bottom of her oversized tote bag.

There had been speculation among her friends that Amelia Earhart — and aircraft — could be found in the tote along with Bigfoot and extinct dodo birds, if the right team of explorers took on the search. Laying that rumor to rest would have to wait until she finished soaking her throbbing brain with fermented potatoes and ethanol.

Jess was certain a quick dash into the changing room wouldn’t be noticed as the groom hadn’t yet taken his position at the altar. Maybe the clueless sap had wised up and was now making a run for the Ohio border.

No luck. She caught a glimpse of him talking to the minister and smiling. She didn’t know him well, but felt sorry for the guy. He was so dumbstruck by love that he couldn’t see past the big teeth and enhanced breasts to the character within his future wife.

But that wasn’t Jess’s problem. The ceremony was not to start for three minutes and she was quick, despite a slight buzz from previous liquor shots. Without any impediments to block her path, she could get to the bride’s room, down the 1.5 ounces of vodka left from a raid on the minibar during a trip to Vegas last summer, and be back in line before anyone noticed her missing. She just had to shake off groomsman number three.

She’d brought a variety six pack of those little booze bottles, knowing that in order to survive the wedding of Mandy Mae Smith — soon to be Jones — she’d need liquid courage.

Not much of a drinker, she’d managed to chug three bottles already, but her duties had kept her from the fourth.

The white crinoline along the bodice of the wide fifties-prom-dress-inspired bridesmaid dress was already rubbing off the top layer of skin on her left arm pit. By the time the evening came to a thank-God-it’s-over close, she intended to be ripping drunk and naked with a groomsman in a vestibule closet somewhere. After all, wasn’t a single woman entitled to be cliché at least once in her life?

“Er, what?” Jess looked way up at tall groomsman number three, Dodger Drake. Yes, that was his name. His fake tanned orange face grinned down from a foot above her, his teeth so white that she became convinced he ate, slept, and probably had sex while wearing teeth whitening trays.

“It’s time to line up,” Dodger said and his gaze dipped unapologetically to her modest cleavage pushed up under her chin by the bone-corset bodice of the dress.

THE SWEETHEART KISS, Book 3 in the Brash & Brazen trilogy and a May 2017 release from Kensington Lyrical Press, may be purchased through these retailers: Amazon, Barnes & Noble, Books-A-Million and Kensington.

A fan of romance fiction since the dark ages, author Cheryl Ann Smith loves to throw her heroines into danger, just to see what they’ll do.  She’s currently working on an exciting a new contemporary romance series that mixes her crazy sense of humor with the adventures of a trio of female PI’s, who are the kick-ass heroines Cheryl has always wanted to be.

Cheryl lives in Michigan with her family, and when she isn’t writing, she dreams of living in a grass hut on her own tropical island. Since that’s unlikely to happen, she looks forward to any vacation that gets her near an ocean.  If you’d like to learn more about Cheryl or her books, you can visit her website at www.cherylannsmith.com, or connect with her on Facebook or Twitter.