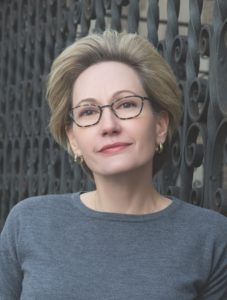 Stuffing. I know it’s most people’s favorite thing, but I don’t like it at all.

AN UNSUITABLE JOB FOR A WOMAN by P.D. James, because I love P.D. James, and I like that she veered from her Adam Dalgliesh franchise to write about this unlikely amateur detective who ends up solving a complex crime.

I guess I would have to say Velma Dinkley, because I want to believe I’m smart and I do read a lot. I’m not very good at solving mysteries, but my characters are.

I am published in the crime fiction genre. Specifically, my three novels (SILENT CITY, FORGOTTEN CITY, and UNHOLY CITY) are police procedurals. Currently, I’m working on a thriller. Writing any novel is challenging, but I would have to say procedurals have special challenges. The plot has to be so tight. There are genre requirements that must be honored. Police procedures must be accurately portrayed, and you must give your readers a fighting chance to solve the mystery, but you also need to distract them with red herrings and give them a satisfying, unexpected ending.

I’m not sure I would like to schlep speakers for anyone, but if I had to do it, I would probably want to do it for someone like Alison Krauss & Union Station or Bonnie Raitt.

Definitely SILENT CITY. It’s the first book in the Claire Codella series. In this book, readers learn about Claire’s backstory as a cancer survivor and get to know how her relationship with Detective Brian Haggerty started.

I would have to say I’m a discriminating shopper. I prefer quality over quantity.

Dame Judi, definitely! She can make even a bad movie seem good. I just saw her in Murder on the Orient Express, and she can still deliver.

I’d like to have Detectives Claire Codella, Eduardo Muñoz, and Brian Haggerty over for dinner anytime. They complement each other so well on the pages, I’d like to see them interact in real life.

I would choose mind reading as my super power. As a writer, I would use that power to gain deeper insight into the motivations of characters.

Start with what you know; enhance it with your imagination.

Seinfeld. I live the muffin tops episode every day.

To become a better writer, I read the works of other talented writers; write daily; and participate with a small group of trusted writers who critique each other’s fiction.

Outside at the apple orchard—unless it’s really cold. I have wonderful memories of apple-picking when I was a child.

After the publication of SILENT CITY, a cancer survivor who read the novel emailed me to say that I had authentically depicted her own experience.

Rose had only joined St. Paul’s in the hopes of getting to know some nice men. Upper West Side Episcopalians, she’d assumed, wouldn’t be all that pious. She had envisioned a spiritual but not very religious group of liberal Democrats who pursued social justice by day and enjoyed their alcohol at night. That had sounded more her speed than Match.com. But so far, she had met no available men, and she was spending way too much time with bombastic vestry members who argued endlessly over stewardship, cemetery improvements, and whether to sell the church’s air rights.

She walked down the parish house steps to head home but paused on the stone path that led to the sidewalk beyond the gate. St. Paul’s knew how to exploit individual talents for the collective good. While Rose hadn’t met the perfect widower in his forties, she had been appointed guardian of the church garden, and it, along with the soothing voices of the choir each Sunday, kept her coming back. She loved this modest plot of land more than any of the outdoor spaces she had designed for wealthy clients with private rooftops high above Manhattan. The little herb garden on the south side of the church could be seen and enjoyed by everyone in the neighborhood, and she had big plans for it.

She decided to check on the bed of Moroccan mint she’d planted last month. She turned right and followed a path that ran along the limestone wall of the parish house. The Romanesque architecture reminded Rose of a medieval castle, and whenever she walked here alone, she sensed the confluence of past and present. The church archives said that two hundred years ago, this Manhattan Valley neighborhood had been a vast stretch of farmland known as Bloomingdale. Wealthy city dwellers from the southern tip of Manhattan had spent their summers on estates overlooking the Hudson River, and those estate owners had built and worshipped at St. Paul’s. Who, she wondered now, had tended her garden back then?

Rose reached the southwest corner of the church and paused to breathe in the fragrant night air. Her Moroccan mint was thriving. She could smell it from here. She turned right again and followed the west wall of the building. The lights over the parish house entrance did not reach around this bend, but she knew her way and advanced confidently until her left foot caught under something on the path and her upper body catapulted forward. She instinctively raised her arms in front of her face and braced for bone-breaking impact, but she did not slam down on stone. Instead, her elbows thudded into something solid yet soft. A bag of dirt left by one of the volunteer gardeners was her first thought.

UNHOLY CITY, a Claire Codella Mystery and a Nov. 7, 2017, release from Crooked Lane Books, may be purchased through these retailers: Amazon, Indie Bound and Barnes & Noble.

Carrie Smith is the author of UNHOLY CITY, the latest Detective Claire Codella mystery from Crooked Lane Books. Her previous books are SILENT CITY, FORGOTTEN CITY, and the literary novel, FORGET HARRY. She is the recipient of three Hopwood Awards from the University of Michigan, a fellowship at the Fine Arts Work Center in Provincetown, and Killer Nashville’s Readers’ Choice Award. Carrie is also senior vice president and publisher of Benchmark Education Company, a literacy publisher. She lives on the Upper West Side of Manhattan. You can find her online through her website, www.carriesmith.nyc, and on Facebook and Twitter.