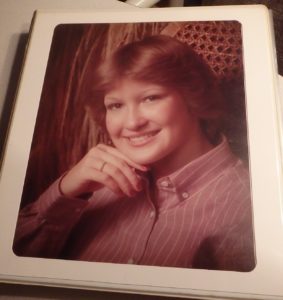 I can’t believe it’s been nearly four months already. Four months since my sister and I experienced one of those life events that we all know is coming, but we dread it all the same. We lost our father.  After choosing to suspend cancer treatment a few months before, Dad passed away on April 30. A flurry of events in blurry lines and awkward words followed, and I was too busy just getting through the days to slow down and focus on the memories. That’s my excuse for not returning before now to those boxes of old photos I brought home after the funeral. That, and I was just too sad.

But this week when I needed a picture for a project, I started digging through the piles of photos and newspaper clippings that celebrated several generations of my family’s history. And under one of the piles, I found it: the album my dad made for me. It has my senior photo on the front cover and the name “Dana” in my dad’s handwriting on the spine. Dad had two of these albums in his book collection – one with my sister’s name and one with mine. This was one of our father’s final gifts to us – a record of our lives through his eyes.

I know it shouldn’t surprise me that my parent would have kept an album with photos of me, but it did. This was my dad. The father who amicably divorced my mom when I was just three years old. The same man who had a few more marriages and divorces and was a beloved stepfather to several other kids along the way. There were times when I wasn’t sure where I fit into all of that. What I didn’t know back then was that all through those transitions and chaos, Dad had taken the time to quietly tuck away pieces that would mean the world to his daughters when he was gone. Things that would say he loved us and was proud of us.

My book is amazing. It has my birth announcement; my whole collection of school photos, even the awkward years; and pictures from my high school dances, our wedding, baby shower and births of our daughters. Dad collected flyers from things like my National Honor Society induction and college graduation, newspaper clippings from academic stuff and poems I wrote for the church bulletin. There’s even a note in loopy teenage handwriting, where I claimed to be out with a certain longtime boyfriend, but “honestly” doing  homework. All of the pieces are carefully mounted with plastic corners and stored behind protective sleeves.

It’s strange how I never knew that Dad was a keeper of memories, at least not until a year before his passing, when I was helping him downsize for a move to an assisted-living facility. We laughed together as we went through his other albums and photo boxes that contained items ranging from his youth basketball team photos and childhood snapshots back in Arkansas to the invitation for his wedding to my mom. My sister and I have divided all of those keepsakes now. We are now the keepers of memories. 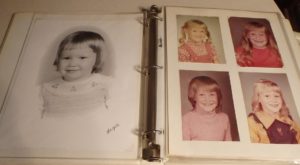 As I flip through my own album, I am sad to see how few of these photos Dad appeared in himself. Sure, he probably was behind the camera in most, and there are a few – with me at our wedding and with our newborn daughter. But every time I look at this album, I will think of my father and the time and care he took in recording my life in pictures.

I miss you, Dad! Rest in peace! 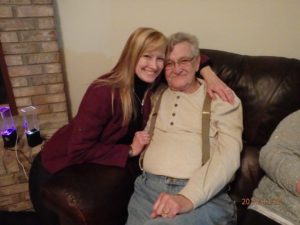