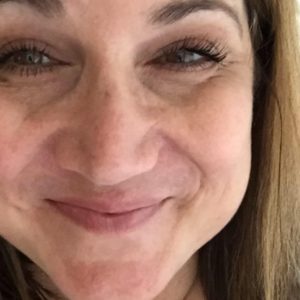 ​We live on the main street in our small Alabama town. Trick-or-treaters start at one end of the street and end up at the other end at the town square for a festival. ​Our family–including the Batgirl-costumed toy poodle and our five-year-old Batman–will be sitting outside with a (giant) bowl of candy and glow-sticks. It’s so much fun!

​I’m sure this is going to show my age, but I loved those high-waisted Laura Ashley dresses. They were so cute and SO comfortable! Take me back to the ’90s, haha!

​It took seven years and four full manuscripts. I did a lot of revising.​

​I have an office in our current home and I love it so much! It has big windows, tons of    natural light and…a door that closes!

​I’d have to say Eve Dallas is my favorite. I’ve read every single one of the In Death series, some of them more than once. A close second would be Hermione, though. Both are independent, strong women who’ve been through some stuff and aren’t afraid to be leaders. I love those qualities in a female character!​

​Facebook is the best for interaction. I also have a newsletter for those who prefer email updates and Instagram. Instagram is new to me in the last couple of years (thanks, young-adult children, for dragging me into the 21st Century) but I really like it, too!​

​Definitely fries, with lots of salt and ketchup for dipping!​

​All the time! When I’m writing a book, the characters are living in my head and imagination. It really is like they’re real people with real problems and real relationships. (Should I admit that on the Internet?​)

I haven’t been there, but I think I would be standing at the edge trying to catch my breath at the sight.​

Big Bang Theory. The nerd/beauty storyline never gets old for me!

​12. Which character from one of your own books do you wish you were more like?

​Claire Conley (the heroine from my first book, THE DAD NEXT DOOR)​ moves across the country with a dream and a half-baked plan to make it happen. I’d love to be that brave!

The Proposal. I’ve watched that movie a hundred times, at least! I’m a sucker for a rom-com, and that one never gets old. In fact, it’s probably on cable right now…

​I’ve always liked to make up stories. Starting in 2009, I wrote eight inspirational romantic suspense books for Love Inspired Suspense, took a long break as we added to our family, and now am writing for Love Inspired Romance as Stephanie Dees.

This is such an impossible question. How can a person only pick two books?

DADDY-LONG-LEGS, by Jean Webster, was a favorite read in childhood, and I still love it. The heroine is thoughtful and intelligent and layered, and there are so many little nuggets of wisdom wrapped into the story.​

While I was on my hiatus from writing, I spent some time working with foster care which was an eye-opening experience for a lot of reasons. One huge realization was just how many kids are out there who, through no fault of their own, have experienced devastating trauma. They deserve families who step in and walk alongside them. The Family Blessings books were born out of my time as a foster parent and are special to me for that reason. The latest one is A BABY FOR THE DOCTOR. 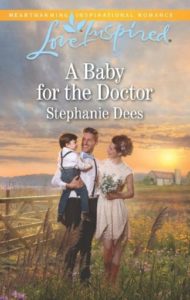 A Baby for the Doctor

Frowning at her, Ash sat on the end of her bed. “Why are you sorry?”

“I got sick and left you to deal with Levi all on your own. And you obviously haven’t left his side.”

“I look that bad, huh?” His smile was quick and rueful as he and rubbed the stubble on his chin.

As if. It seemed impossible, but he was even more handsome with the scruff. Jordan raised an eyebrow. “Pretty bad.”

Ash chuckled. “In that case, I need a favor.”

“Really? Anything? You don’t want to know what it is first?”

She narrowed her eyes. “Now you’re scaring me. What is it?”

“I have to go to this fundraiser in a couple of weeks, one that’s important to me. I need a date.”

“You did say anything, remember.”

“No.” He smiled and her heart forgot to beat for a second. He was exhausted and stubbly and still his smile could make her swoon.

“Okay? Really?” There was genuine surprise and excitement in his voice.

She was already regretting this decision. But she did owe him one and if that’s what he wanted…“I think you know what you’re getting into with me by now, so if my being your date is you calling in the favor, you got it.”

“I’ll text you the details when I’m awake enough to remember them.”

Levi stirred and whimpered in his crib. Jordan stood up, swayed, and sat back down to regroup.

She tried again and this time, she made it to the sweet boy’s bed, only coughing a little bit. She smoothed his hair away from his forehead and sang again the song she had sung to him the first time she saw him and almost every day since–Our God is a great big God and He holds us in His hand.

The little body relaxed and he curled up around his stuffed animal, tucking his hands under his chin as she stroked his soft curls. She covered him with the fuzzy fleece blanket, her legs shaking with the effort of standing so long.

When she turned around, Ash was sound asleep on her bed, legs curled up, feet hanging off the bed. She drew the blanket over his shoulders and stood there a moment, taking in the beautiful face, even with three days of stubble, even with lines carved from exhaustion. Those small imperfections only made him more attractive, given the reason behind them.

She resisted the urge to smooth his hair like she had Levi’s. He had many more layers to him than she’d first thought. He was still that guy–the easy-going, guitar-playing ladies’ man, but the more she was around him, the more she realized he wasn’t just that guy. He was real and deep and…complicated.

She got another blanket out of the closet in the room and settled into the reclining chair to let Ash get a few hours of sleep.

He’d stepped up and been her rock through this whole experience. Tomorrow, they were checking out. And as much as she wanted to be at home in her own bed, there was a part of her that would miss having him right by her side. Things wouldn’t be the same after they left the hospital, and they shouldn’t be.

She didn’t want to need him. But somehow, despite her best effort, she did.

A BABY FOR THE DOCTOR, part of The Family Blessings series and a September 2017 release from Harlequin Love Inspired, may be purchased through these and other retailers: Amazon, Barnes & Noble, Books-A-Million  and Harlequin.

Award-winning author Stephanie Dees lives in small-town Alabama with her pastor husband and two youngest children. A Southern girl through and through, she loves sweet tea, SEC football, corn on the cob and air-conditioning. When she’s not writing, she’s chasing kids and drinking coffee, not necessarily in that order.  Learn more about Stephanie and sign up for her newsletter through her website, www.stephaniedees.com, and connect with her through Facebook and Instagram.