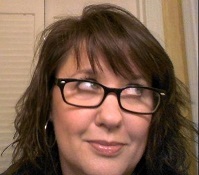 A heart with a banner reading “sweet” across the middle.

A dystopian story titled “The Girl Who Stopped World War III.” I was in 5th grade.

This is too funny! I’m putting the finishing touches on my “off-limits” story (The Proper Care and Feeding of a Broken Heart). A few months ago I gave myself permission to write this no-holds barred contemporary romance with profanity and off-the-charts sex. It releases in December, part of a “Kissables” series.

Neither. Except for Fixer Upper‘ and Flip or Flop, I avoid reality TV.

6. Is social media a bad habit for you, and, if so, what is your favorite time drain?

7. With no money limit, if you could construct the most perfect writing space, what would it look like?

Big windows. A fireplace. Built in shelves. A comfy couch.

Reading now: Warrior by Nicole Jordan (a throwback to the ’90s) and The Master by Kresley Cole. Dream of Me by Josie Litton is best book.

Bob Dylan (I saw him in concert in Santa Barbara).

I love Cyrus Ryland from The Lady Meets Her Match. He tried to fit into Society, but he was big and out of place, a commoner who eventually saw through ulterior motives.

13. Who was the first person – besides your mom and dad –   who told you that you could write?

I love when characters reveal deeper story issues. No matter how hard you try to plot those moments, characters are like friends who share themselves on their own sweet time. 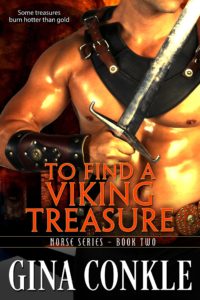 To Find a Viking Treasure

Brandr sliced the oars through water…back and forth, his body’s motion hypnotic and smooth. “Go ahead. Talk to me.”

The Viking could be a mystical warrior dressed in black against waning fog, his graveled voice working a kind of silken magic. Sun shined through clouds, the pearled orb anointing his head. Perhaps Odin did send Brandr to save the day.

Wraiths rose up from the channel as if to push them along. Did the Norse gods want them to succeed? She didn’t believe in Odin and his Valkyries, but the stories Vikings spun at night entranced her.

“You could tell me what you’ll do with your reward,” she said.

He snorted. “I said you could talk to me. Not the other way around.”

“That’s not how it works. People take turns talking and listening to each other. It’s called conversation.” She angled her head coyly. “Vikings can do it. I’ve seen it happen.”

Brandr squinted at tree tops rising above the mist. “Never been much for talk.”

“Your mouth never stops when trading jibes with me.”

His chuckle was raspy and low. “You have a way of loosening my tongue.”

To her shame, his laugh cut a scorching path through her body and her legs fell open under her skirts. Her knees were heavy, and she left them open.

“You’re a warrior long in service to Lord Hakan. Surely you’ll get a bigger reward than a handful of coins?”

His tarnished silver eyes pinned her. “Maybe I get you.”

To Find a Viking Treasure may be purchased through these online retailers: Amazon   |  B&N  | Kobo  |  iBooks   |  GooglePlay.

Hi, I’m Gina Conkle, writer of Viking and Georgian romance. I grew up in southern California, and despite all that sunshine, I love books over beaches and stone castles over sand castles. Now my family, which includes my favorite alpha male, Brian, and our two sons, live in Michigan where I dabble in gardening (I grow organic tulips) and try my hand at cooking (which meant feeding Viking recipes to my family this last summer). If you’re looking for free guilty reads, check out my newsletter.