If there’s one thing I enjoy almost as much as writing books, it’s READING books. I love discovering new authors, too. So as I planned my new blog, I decided this could be a perfect place to introduce my writer friends to new readers and introduce my reader friends to some of their new favorite authors. Only we’re going to do this Speed-Dating style. Just 15 getting-to-know-you questions, a little bit about the author and an excerpt from one of her stories. Check them out right here each Wednesday, and if the spark is there, you’ll have a match…or two…or three. 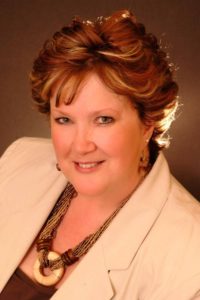 Cinderella-my first exposure to Disney. Really was into that waiting for my prince stuff. But really, I’m more the Elsa in Frozen type.

59 published, another full three in a drawer, countless body parts on flash drives!

A pint of Ben & Jerry’s – something with coffee-flavor, nuts and caramel swirl . . . or anything salty!

China (something). One of those in the box somewhere. A publisher actually read it once, but I don’t think 750  pages of wandering cast and ninjas is worth revisiting.

I’d pack my COMPLETE WORKS OF WILLIAM SHAKESPEARE from college and have it all: drama, romance, comedy . . . and being stranded in a Tempest. I could play all the parts.

Most of them! Regency, historical, contemporary romance and suspense, paranormal, non-fiction and even a screenplay or two!

Steak on the grill and beer.

Fifth grade when I first saw my name in print under a fractured fairy tale in my school’s newspaper. It was awesome! Never wanted to be anything else.

Supernatural reruns??  I do like Cupcakes Wars. Food Channel rocks!

All my favorite heroes are dark, damaged and dangerous . . .being sensible, I’d have to say . . . any of them, though right now, my current hero, Colin Terriot, a shape-shifter prince, no less, is leading the pack (the six-pack!). Besides, they all live with me anyway.

That my outfit and jewelry won’t match. I’ve been late to work trying to find the right second earrings!

Any of them would give a reader the feel for my style:  Fast-paced, sometimes gritty, sizzling with added sass and humor. Probably REMEMBERED BY MOONLIGHT from my “By Moonlight” dark paranormal shape-shifter series because it sets up the off-shoot “House of Terriot” books I’m currently writing. Or if you’re a contemporary reader, TOTALLY YOURS, written under my pen name Dana Ransom – now on sale for just $1.99! 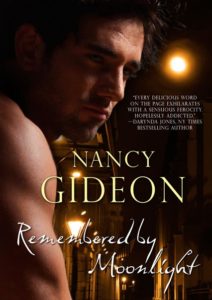 The deadly leader of a shape-shifter clan with no memories of who he is and a dedicated cop hiding a heart-breaking secret face impossible odds in steamy New Orleans that conspire to pull them apart. Because the enemy they pursue . . . might be him.

Had she expected it to be easy having him here so close and yet so agonizingly far away? Bad enough watching him in that antiseptic clinic cell, a prisoner of his own panicked madness, raving, raging, out of control. Worse was having him here in the lush, sexy surroundings he’d built for them to share, temptingly near yet impossible to reach.

A bargain made in heartbreak hell.

Though she might be tortured by cherished memories, he was not. She was nothing to him but a protective port in his emotional storm, and that knowledge was driven home like a stake through the heart every time they were together, every time he stared at her through those cool green eyes without the slightest flicker of response. Every time he took that distancing step back to evade the casual graze of her hand. Every time he lay next to her in the night and silence created a force field of discomfort.

Tripping over him every minute of the damned day only emphasized how much she wanted, needed him back.

And underlined how far away he was.

Praise from Publisher’s Weekly for the “By Moonlight” series:

REMEMBERED BY MOONLIGHT available on Amazon.

Nancy Gideon is the award-winning author of over 59 romances ranging from historical, regency and series contemporary suspense to dark paranormal, with a couple of horror screenplays tossed into the mix, and is currently testing the “Hybrid author” waters.  She works full time as a legal assistant in Central Michigan, and when not at the keyboard, feeds a Netflix addiction along with all things fur, fin and fowl. She’s also written under the pen names Dana Ransom, Rosalyn West and Lauren Giddings and is a member of the Mid-Michigan, PAN and FF&P Chapters of RWA. 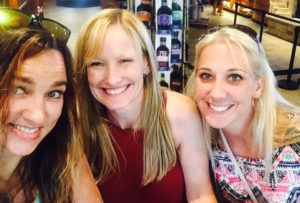 We’ve all seen these groups of women before, clearly on out-of-town adventures, shopping, dancing, sipping cocktails and laughing. Mostly laughing. Loudly. Until they’re out of breath and wiping away happy tears.
This month I became one of them, joining some old and new friends on a Girls’ Trip in beautiful Northern Michigan. Now I can only ask myself two questions: Why didn’t I do this before? and When can I do it again? I can’t think a single moment from the weekend without giggling. 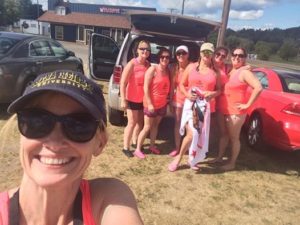 So why does concentrated Girl Time become so important as we enter this new phase in our lives, the one after babies and career beginnings and before grandkids and retirement? For me, it’s the comfort of shared experiences. Of finding, cherishing and sometimes losing our life partners. Of corralling preschoolers and surviving teenagers. Of celebrating job promotions and mourning the loss of parents. Who else could we count on to trade war stories with us about childbirth and mammograms and hysterectomies?

Often the women who join us for Girls’ Weekends are the same ones who have traveled our life journeys with us, have cheered our victories and cried with us in our losses. They know the punchlines of  all our jokes and yet let us tell them again and again. Friendships like these deserve to be celebrated, and if we have to do that on beaches, at vineyards or even in castles, then we’ll just have to make the sacrifice. 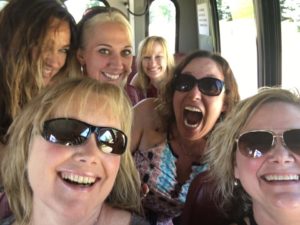 As a newcomer to my own  Girls’ Trip group, I had the privilege of meeting some of these wonderful ladies for the very first time while making new memories with fellow author, Isabelle Drake, who has been a friend for twenty years. Through this experience, I have learned that you might arrive for a Girls’ Trip as acquaintances, but after sharing stories, adventures and a few bruises from a particularly bumpy river tube tour, you leave as friends. And you take with you enough great memories and stored laughter to hold you over until next time. By the way, where do I sign up for the next trip?